Why Singapore’s kids are so good at maths 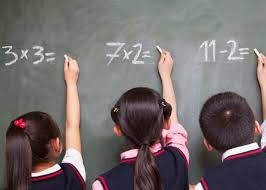 “Maths and science are core subjects in Singapore, taught throughout primary and secondary education. While students can choose to study humanities for A-levels, they must continue studying either maths or at least one science subject until they leave school (the reverse is also true: science students must take one subject from the humanities). From the later years of primary school onwards, children have specialist maths teachers.

The “Singapore method” was first developed by a team of teachers in the city-state in the 1980s, who were given the task of creating high-quality teaching materials by the ministry of education. They studied the latest behavioural science research as well as travelling to schools in other countries, including Canada and Japan, to compare the effectiveness of different teaching methods. Aiming to move away from simple rote-learning and to focus instead on teaching children how to problem solve, the textbooks the group produced were influenced by educational psychologists such as the American Jerome Bruner, who posited that people learn in three stages: by using real objects, then pictures, and then through symbols. That theory contributed to Singapore’s strong emphasis on modelling mathematical problems with visual aids; using coloured blocks to represent fractions or ratios, for example…..”

“The Singapore curriculum is more stripped down at primary level than in many western countries, covering fewer topics but doing so in far greater depth — a crucial factor in its effectiveness, according to the OECD’s Schleicher. “When you look at England and the US, [their curriculums] are mile-wide and inch-deep,” he says. “They teach a lot of things but at a shallow level. Mathematics in Singapore is not about knowing everything. It’s about thinking like a mathematician.” ”

Read the rest of the article about Singapore Maths HERE >>>>>